So, you noticed that a funny noise has come from your guinea pig, followed by a stinky smell. And this makes you wonder “Do guinea pigs fart?”

Typically, guinea pigs do fart. The reasons why include: digestive issues from antibiotics and the sudden introduction of a new food. Certain foods and roughage cause gas as well. Excessive flatulence or signs of bloat are serious conditions and need to be treated by an experienced exotic vet.

In this blog post, we’ll explore farting in guinea pigs from a variety of perspectives. We’ll start by looking at the possible triggers for farts and then take a look at some behaviors you might see as well. Finally, I’ll cover what you need to look for if your piggie’s gas issues become serious.

Most guinea pigs fart sometimes. And it’s not big deal – most of the time. The next time your guinea pig farts, it could just be that their digestive system is doing its job and processing food more efficiently.

So, guinea pigs fart. But, why?

Farts happen when gas builds up in the digestive system. Farts are inevitable. Guinea pigs fart for several different reasons. Here are some of the most common causes:

Guinea pigs fart because of diet changes, antibiotics, swallowing too much air when they eat, or overfeeding cruciferous foods like cauliflower, broccoli, and kale.

If you want more answers to quirky guinea pig behavior, check out these posts: Will Your Guinea Pig Eat Her Babies? (What You Need To Know) and Can Guinea Pigs Sense Emotions? (Find Out Now)

Pet guinea pigs typically don’t make a stink with their farts because they are so small that the gas doesn’t affect the air around them.

Instead of smelling their cavy’s farts, many owners report “feeling” their piggies fart if it happens when they’re holding them – such as rumblings, vibrations, or light puffs of air.

I polled 443 guinea pig owners – asking them what they thought the guinea pig’s farts smell like and here are the results:

When I looked to see how people would describe the smell, it’s amazing how varied the answers are:

The evidence suggests that the average smell of a piggy fart isn’t that bad (they don’t stink). But, just like us humans, some circumstances mean that they can easily stink up the room with their flatulence.

If you notice a frequent, strong gassy smell coming from your pet (with a swollen belly) this is probably not normal. It could be an indication of either an upset stomach or some kind of internal health issue like bloat. A visit to the vet might help figure out what needs attention and will ensure that everything is okay for your pet.

Guinea pigs can fart loudly, but this isn’t always a sign that something is wrong. Lots of healthy guinea pigs have been known to really rip one – from time to time.

Through my survey, I noticed that about:

Some respondents of the survey shared that they have had guinea pigs that fart loudly and also described it:

Some said that the guinea pig fart was like when you blow up a balloon and let it go, others said that it sounded like a “pfffffffft” sound.

Another person described her guinea pig’s farting sound as “a little perculator” – like for coffee (bubbling noises).

So, what causes the noises? The noises are caused by the escaping gas through the pigs’ rear end as it passes from their digestive system into the anus, where some of it is released out of the body as the guinea pig’s fart.

Do Your Guinea Pigs Fart Too Much? Try These Tips!

If your guinea pigs fart too much, try the following suggestions to see if it can help control flatulence:

The main cause of piggie’s farting is the food that they eat. Closely monitor how much root or leafy vegetables (cruciferous veggies) your give your cavies such as:

These have a high fiber content that can be hard for your little friends to digest.

Spice up your piggie’s menu by adding anti-gas fresh foods and snacks will provide more variety in their diet and keep them healthier overall.

Here are a few great suggestions for snacks, all of which will be highly enjoyed by guinea pigs. Best of all, they’re less likely to give your piggie’s gas.

Don’t go crazy with them, though. A good rule of thumb is to make sure your cavies get a healthy balance of foods, so they’re able to digest them properly – and pull nutrients from them

You don’t have to avoid cruciferous veggies altogether – unless you have a little friend who has a particular (gassy) sensitivity to one of them.

Just make sure that you pay attention to how your piggies respond to these foods, and don’t give them more than a few nibbles. If you notice discomfort, like increased flatulence or discomfort when passing stool, it’s best to skip it for the time being.

Healthy vegetables typically come in different textures – like collard greens or cauliflower. Some are more stringy or dense. But, they can be healthy snacks if you regulate your pet’s gas levels. Most foods don’t need to eliminated from their diet unless they are a known source of discomfort.

If you want more answers to quirky guinea pig behavior, check out these posts: Why Guinea Pigs Don’t Need A Light At Night (Read This Now) and Hair: What You Need To Know About Why Guinea Pigs Eat It

Up The Hay Consumption…Like A LOT

It’s recommended that each cavy have access to 1 cup of produce (fruits and veggies) each day.

(And most of it should be leafy greens).

But veggies are the back up dancers. Hay is the star. It’s essential for a healthy guinea pig, and it’s great for keeping your guinea pig’s digestive system moving the way it should be.

Hay will control your little friends’ flatulence, by making sure they keep all those nutrients moving through their digestive system at a steady pace.  That way, any gas can be shot from their bellies before it’s overly trapped and causes discomfort to your little friends.

So make sure you always have an enormous pile of hay available and accessible. If you have multiple piggies, they can help mow through a lot of hay each day – so make sure to replenish it daily.

What kind of hay should you get? Well, it depends on what your guinea pig could have available to them in a natural setting. For example, timothy is a great option. Meadow and orchard hay are good for piggies and people with allergies.

Additionally, make sure that your piggies’ water intake is consistent.  You’ll need a reliable water bottle or bowl available at all times. Water helps move food through your pet’s digestive tract, too.

Fiber is important for a guinea pig’s diet, but too much of it or the wrong kind can cause gas buildup. Stick with hay as your piggie’s main source of food and you can’t go wrong.

One factor in how quickly a piggies eats is just as important as what they eat: air. When piggies have to scarf down food, it’s easy for them to swallow more air than normal.

As mentioned before, this air just sits in your piggie’ stomach and creates more flatulence than necessary.

To make your piggies slow down their eating, try the following:

If a guinea pig is producing gases without expelling them, it will lead to bloating. These little critters don’t pass gas as easily, so if a lot is being produced, it can lead to bloating. Unfortunately, guinea pigs don’t always how obvious signs of bloating.

Bloat is a serious build up of gas that requires medical attention. So if you see any of these symptoms of guinea pig bloat– get to a vet immediately:

Some piggies have behavior changes because they’re in so much pain from bloating. So pay attention to signs of depression or unusual outbursts.

Guinea Pigs are known for their vocalizations. If you observe (and listen to) your little friends carefully, they’ll give you a sign something might be wrong – or that they feel discomfort or pain.

Pay attention to your little friend’s body language as well – if you notice them limping, acting agitated, or walking strangely but there isn’t an injury in sight then this could mean more investigating is needed.

Some of those symptoms could also be signs of something other than bloat so you should visit your veterinarian for proper diagnosis when in doubt. If you’re concerned that your piggie is bloated or in pain, you should see a vet immediately. Bloat can kill your furry friends.

Conclusion: Should I be Worried If My Guinea Pig Is Farting?

One of the most common questions people have about guinea pigs if farting means that their little friend is sick.

In general, you shouldn’t be worried if your guinea pig farts and this could even indicate that he’s healthy. However, there are other causes for concern such as a bloated belly, excessive farting, discomfort, anorexia, or signs of pain. These symptoms require a trip to the vet and can indicate more serious health problems that may be easily treated.

Your little, furry friends deserve the best, so make sure you give them a well balanced diet and provide great care. If your piggy is having some dietary issues or just doesn’t seem to be feeling their usual self, adjust his food.

Make sure you know what they’re eating so if there are any dietary problems come up; these can be corrected as needed without too much hassle at all. Keeping a guinea pig food journal would help a lot with this task.

You should also monitor their behavior to make sure they are healthy and happy! If something seems off with your pet, don’t hesitate to have a specialist examine them. Recognizing changes in their behavior is crucial when deciding whether or not they’re well.

(Ice), A. B. (n.d.). 13 foods that cause bloating (and what to eat instead). Healthline. https://www.healthline.com/nutrition/13-foods-that-cause-bloating

You may have seen a photo of a cute guinea pig dressed in clothes and thought, “That’s adorable!” But you should think twice before dressing your piggies in clothes at all. I decided to do my research and find out if it’s safe and healthy for cavies to wear clothes. Dressing your guinea pigs in… 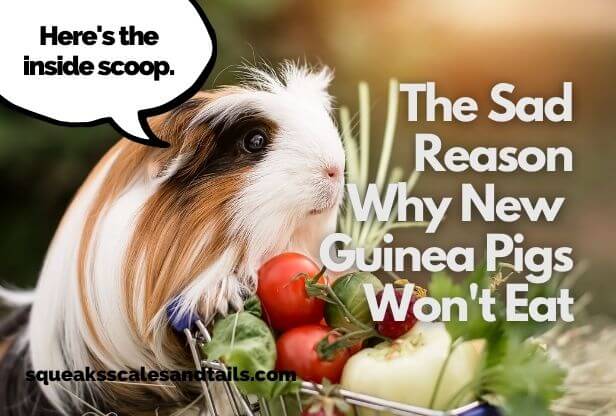 As an Amazon Associate I earn from qualifying purchases from Amazon.com and other affiliate links, at no extra cost to you. Wanna read something more boring than watching paint dry? Click HERE for a peek at my disclosure. So, you’ve adopted a new guinea pig and you’re home with them, ready to welcome them into… 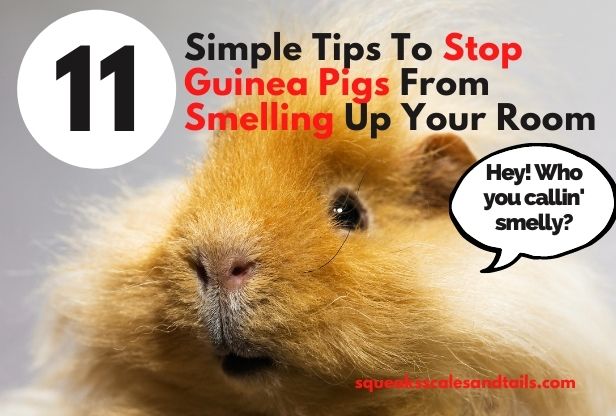 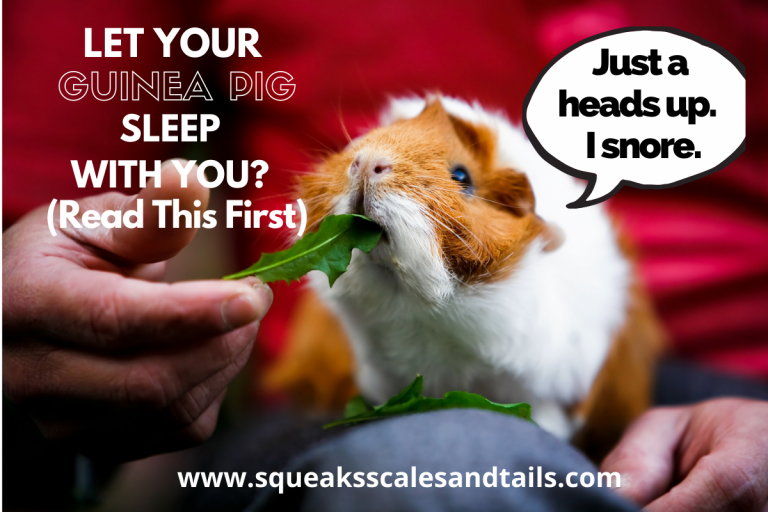