Pet guinea pigs to have around the house, but they can be a little bit of work. Especially when it comes to their nails. But what do you do if your guinea pig’s nails are bleeding from an accidental nail trim?

Generally, if a guinea pig’s nail is bleeding from a trim, you must treat it by: disinfecting the nail, applying an appropriate ointment or powder) such styptic powder, and applying pressure until the bleeding stops. Make sure that your guinea pig had clean bedding to avoid infection.

What To Do If Your Guinea Pig’s Nail Is Bleeding

Try not to panic. If you panic, you won’t be able to think clearly.

And you definitely need to be able to think through how you’re going to take care of that bleeding nail.

If you have been trimming your guinea pig’s nails and one of them happens to start bleeding, it’s likely due to an accidental cut of the “quick” (more on this later).

Take a moment to relax and carefully assess the wound; try not to touch or jostle it too much.

A guinea pig’s nail has blood vessels located beneath the nail bed. The main blood vessel is called the “quick” and you must avoid cutting into it.

And as you may have already guessed, the blood supply in the quick is reasonably large.  That’s why it sometimes looks like the blood is gushing out like a fountain when you nip it.

By avoiding the quick, you can avoid bleeding in a trim situation.

(Actually, your furry friends can sometimes tear their own nails on objects in their cage. That’s why it’s a good idea to regularly check your piggies nails for tears, splits, or other signs of damage.)

To treat a cavy whose nails are bleeding, follow these steps (which will work whether the bleeding is from a nail trim or if your piggie did it to herself:

It’s very important to clean the wound before you apply any type of powder. Move quickly to try to stop the blood flow.

To disinfect the nail, dip it in a little saline solution.

Don’t have saline solution? Make some yourself. Boil and cool about 1 pint (500ml) of water. Then mix one teaspoon of salt. Stir it up.

Then dip the bleeding nail into the warm water.

2. Apply A Powder To Stem The Bleeding

Don’t stray too far from what’s been mentioned in this article to stop your piggie’s nails from bleeding. Keep in mind that whatever you put on your piggie might be licked off by your little friend.

3. Apply Pressure To The Wound

Now, you’ll need to apply pressure with to help stop the bleeding.

You can use one of the following items (just make sure they’re clean):

(Some people recommend not putting anything on your piggie’s bleeding wound except for pressure. I’ve always preferred to be safe than sorry, and just disinfect the wound first.)

Some guinea pigs will only let you clip their nails a few at a time. If it’s too much and your little friends get really squirmy and upset, try again later. But keep at it. The more you do it, the more your little friends will get used to getting their nails clipped – especially if there’s treats involved. They’ll learn to sit still for it and enjoy the treat – which will help you avoid clipping the nails to deeply and causing any bleeding.

When Should The Bleeding Nail Stop Bleeding?

You can stop the nail bleeding in 10-15 minutes by applying firm pressure to the nail.

You also want to make sure that you keep the powder on top of the wound until it’s completely dry.

If your guinea pig is still bleeding after that time, you need to contact your vet for an an assessment and treatment plan.

The best thing you can do is make sure your pet has a clean, tidy spot to heal.  So, keep the cage clean and make sure the bedding stays fresh.

Don’t worry about accidents – they happen.

And if your furry friend has dark-colored nails, it makes the task even more difficult – it’s tougher to see the quick.

If you want some tips on guinea pig grooming and cleaning tips, check out these posts: How Long Should Guinea Pig Nails Be? (Find Out Now) and The Ultimate Guinea Pig Bathing Guide [Wheeky Clean Tips]

What Do I Do If My Guinea Pig Has Long Nails?

If your furry friend has long nails, then you’re going to have to carefully trim them yourself (if you feel comfortable doing so).

Alternatively, you can take your little friend to a vet or pet store that offers nail trimming services to snip your piggie’s nails to a reasonable length.  If you don’t, your piggie will have serious foot problems eventually.

If you want some more information on guinea pig welfare, check out the post: 7 Alarming Reasons Why Guinea Pigs Pee Blood

Will My Guinea Pig’s Nail Grow Back If Its Been Torn Or Cut Deeply?

Typically, a guinea pig’s nail will grow back eventually – even if it’s been torn.

What you’ll notice is that the nail will grow back thicker an darker than it was before the tear.

Other than that, your piggie’s nail should be completely normal.

When your guinea pigs’ claws start to get longer, the blood vessel known as the “quick” will also become exposed. As a result, they might curl. When this happens, it puts more stress on their feet and can lead to injuries.

Guinea pigs need nails trimmed. Just be as careful as you can not to hurt your fur babies while you’re doing it.

Wanna avoid getting scratched by your furry friend so much? Those nails need to be trimmed.

Nail clipping for piggies is sometimes hard and nerve-wracking. Follow these tricks and it’ll be much easier for you and your little friend.

Active guinea pigs get their nails worn down faster than inactive pets. This is because they walk on hard surfaces and not soft bedding like lazy pets do.

Things To Remember About Bleeding Nails

A guinea pig’s nails may need to be trimmed when they get too long for the animal’s comfort or if their toes are getting caught in things.

However, keeping your pet groomed can prove challenging because they’re so squirmy and fast!

But what do you do if your guinea pig’s nails are bleeding from an accidental nail trim?

Guinea pigs and other animals have blood vessels in their nails. If the nail is cut too close, they will bleed (sometimes an awful lot!).

If you accidentally cut into one nail and it starts bleeding all over everything, don’t panic! Just follow these steps

And there you have it! Make regular nail trimming a part of your furry friend’s grooming routine.

But if you can’t get the bleeding to stop, don’t worry. Because you did everything you could and it’s time to take your pet to the vet – pronto.

Did any of the advice in this article help you out? I hope so.

If it did, let me know in the comments below.

What do I need to know about my Guinea pigs’ health? (n.d.). RSPCA Knowledgebase – Let Australia’s most trusted animal welfare charity help you answer the big questions. https://kb.rspca.org.au/knowledge-base/what-do-i-need-to-know-about-my-guinea-pigs-health/#signs-of-a-potential-problem 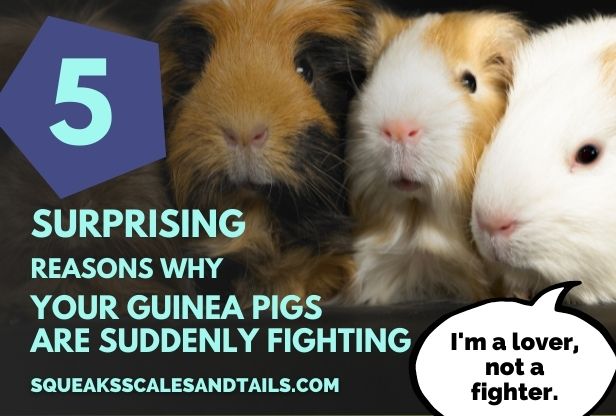 So, there’s trouble between your guinea pigs that came out of nowhere. And now you’re wondering why your guinea pigs are suddenly fighting. With many potential causes for this behavior, it is important to know how to stop them from fighting so you can keep the peace in your home and give them a happy… 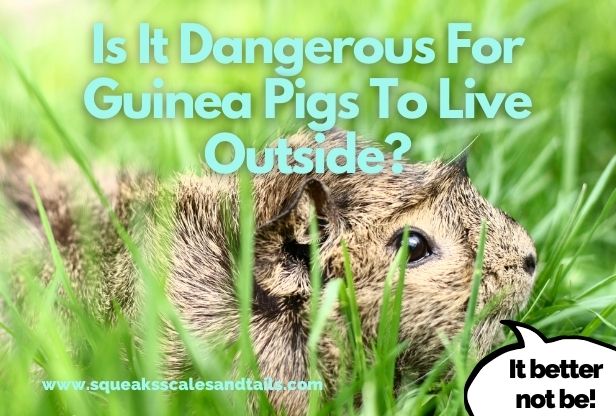 So, you really want a guinea pig, but there’s no room in your house. This probably makes you wonder “Can guinea pigs live outside?” And if so, is it possible to do it safely? Typically, guinea pigs can live outside safely. But, they’ll need to be protected from outdoor dangers such as pesticides, predators, toxic… 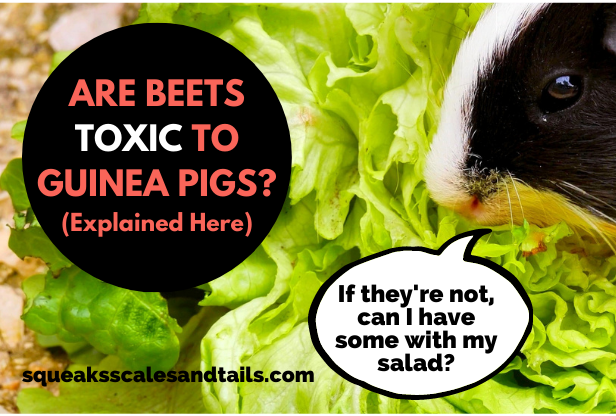 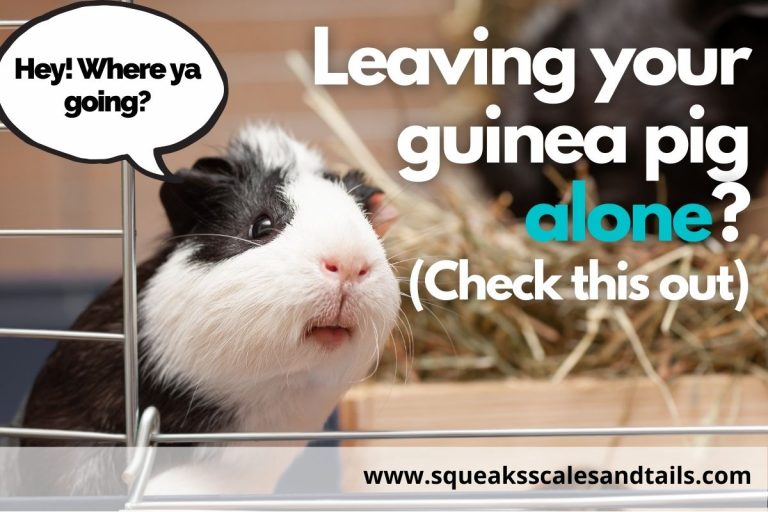 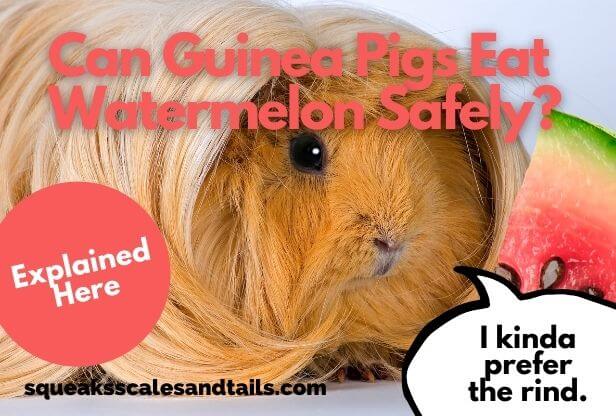 You’ve probably had a hard time figuring out if watermelon is okay for guinea pigs to eat. No worries. You’re not alone. I did some digging and found that: Guinea pigs can eat watermelon safely as long as they don’t eat too much of it, too often. The high sugar content and water content can… 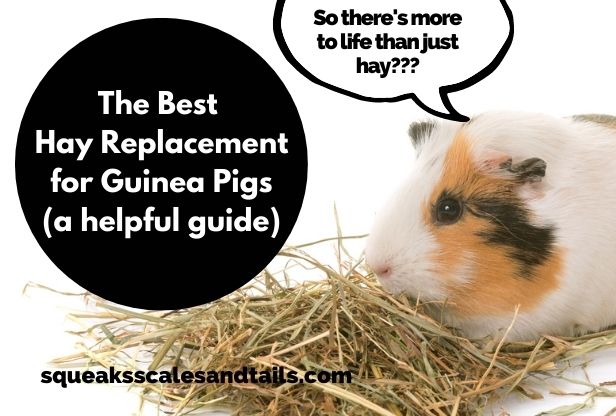 Hay is a food that is important to guinea pigs. But if you can’t get the hay, or are allergic to it, what should you feed them? What is the best hay replacement for piggies? On the whole, fresh grass is the best choice to temporarily replace hay. Guinea pigs can forage for this in…